After our quite frightening night before, off the coast of Carriacou, we rounded the corner and dropped the anchor for the first time since Fernando De Noronha. Dantelle, Dad and I dropped the dingy and we all boarded it to make our way into the bay to clear into Grenada. The anchorage was filled with all sorts of cruising boats. We cleared in with ease and took a few days to recoup after the long and bumpy passage. After doing a small re-provision in Carriacou we sailed south to the main island of Grenada. This is where we sadly losing our last crew member, Werner.  We pulled into Secret Harbour in Mount Hartman Bay and said our goodbyes to him.

Secret Harbour became our base of operations for Grenada for a few weeks. During that time, we began to settle into the cruising life, making friends with other cruisers and joining the weekly grocery run from the marina to the local IGA for our groceries. During these weeks Dantelle surprised me with a little island adventure of our own. For valentine’s day she organised 2 nights at the Cabire Beach Lodge.

Getting there required us to hike our way up the giant hill of the Marina, make our way to the local bus station, grab a local mini bus that sped at insane speeds down windy roads and then trek another 2km downhill to the most magical little beach lodge. We enjoyed some cocktails and some amazing locally caught and cooked Tuna steaks. We spent the days relaxing and exploring the local area before repeating our insane trek back to Catching Up. 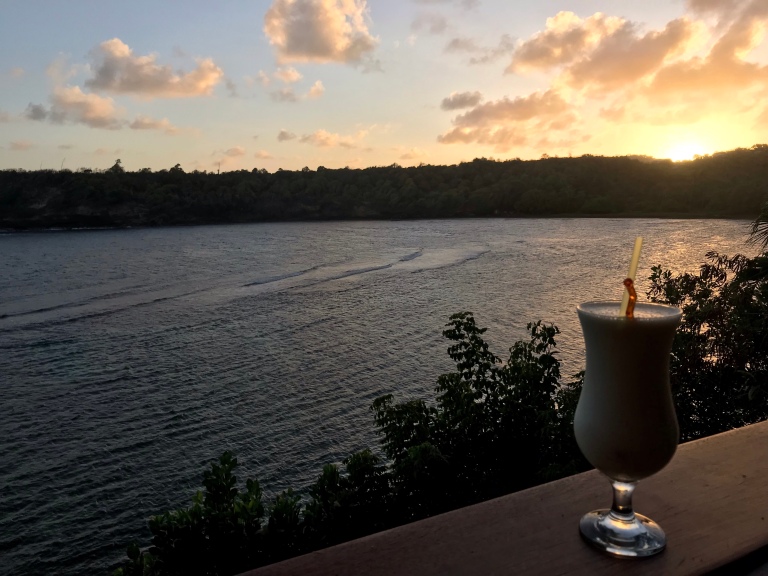 Once we returned, we spruced up Catching Up yet again for our next friends Steve and Debbie (Now enjoying their own Knysna500) to arrive. Once they arrived, we decided to sail up to Molinere Bay, home of the first Underwater Sculpture Park. We spent a few hours exploring the intricate sculptures set up in unique positions.

After a few days of sailing around the island we sadly had to return to see off Steve and Debbie. Before heading off, we all organised a tour with the local boat taxi driver in Secret Harbour, George. We all loaded up into the Taxi and travelled around the island with a showcase of the culture and landscape of Grenada. On the trip we had a demonstration of the local spice of Grenada (nutmeg). The trip took us through the lush greenery and sheer jungle drop offs that Dantelle and I had been already blessed to see on our previous adventure. We stopped off at a local Grenada Chocolate Factory to try Grenada made chocolate as well as the Three Rivers Rum Distillery.  As a rum fanatic, I was beyond excited to have the opportunity to walk through the entire process from sugar cane to rum with a tasting at the end.  To this day, Three Rivers Rum is still the strongest rum I have tasted (75% alcohol).

Towards our last week in Grenada, Dantelle received an invitation from Chess Grand Master Nigel Short for us to attend the Grand opening of the Grenada Chess Federation. The event coincided with us leaving from an anchorage further North as we were making our way back to Carriacou for clearing out. So, once again Dantelle and commenced our adventure to the Grenada Olympic Federation building to be privy to the founding of Grenada’s Chess Federation. At the event Nigel Short played a Simultaneous Exhibition and invited Dantelle to partake (for the uninformed like I was, he plays a whole bunch of people at the same time).

That was the first time I got to see Dantelle play a chess game. I didn’t realise how long it would take but it was entertaining nonetheless.

Just like that, a month in Grenada had passed. The island and its people are stunning. The kind-hearted nature of Grenadians helped us settle into the Caribbean cruising lifestyle. The adventuring and exploring we did in Grenada provided us good insight into what to expect as we ventured up the island chains. One day I hope to return to to Grenada! We upped anchor off the two islands that split down the middle between Saint Vincent & The Grenadines (SVG) and Grenada and sailed off to Union Island to clear into SVG.

This site uses Akismet to reduce spam. Learn how your comment data is processed.

We are currently underway to St Helena. There will be a delay in posts from this point forward due to internet connectivity but it will be done as soon as possible.